The Band
School of Dancing

longside Natalie Westerdale, Tanja Cibulski is the second member of staff at the Fiddle & Feet School of Dancing.
Natalie Westerdale (formerly Natalie Aboulfath) is a senior instructor of the Irish National Folk Company, and regularly expands her knowledge of Irish dancing with intensive courses, offered by the INFC in Dublin. Her most influential teachers are Angeline Whelan, Melliora Heeney-Duffy, and Colin Dunne. Since 2002, she has been the senior trainer of the INFC-approved and examined Irish Dancing Instructor course in Germany. She has been a guest teacher for Irish dancing at many dance teaching conventions and workshops (including INTAKO 2002 and 2004, ÖTAKO 2000 and 2005, the Danish Dance Teachers' Congress 2004-2008, Norddeutsche Tanztage Worpswede run by the DBfT 2012, and many others). Natalie opened her own school, the Fiddle & Feet School of Dancing, in 2005 and regularly performs with bands such as "Scapa Flow", "Fiddle & Feet", "Scotch4" and "Shufflescuff".
Tanja passed her Irish Dancing Instructor's exam in 2004 with the Irish National Folk Company, and taught Irish dancing classes at the Fiddle & Feet School of Dancing for several years. Her personal development has recently led her on to quieter paths, in the area of meditation and dances within a spiritual context. Subjects such as healing, international dance folklore and meditative dances have now also found their place at the Fiddle & Feet School of Dancing.
Lovis Hauck has by now taken over Tanja's role as a teacher for part of the Irish dancing classes. She is also a senior instructor with the Irish National Folk Company, and a founder member of "Shufflescuff". 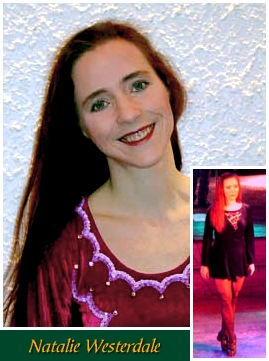 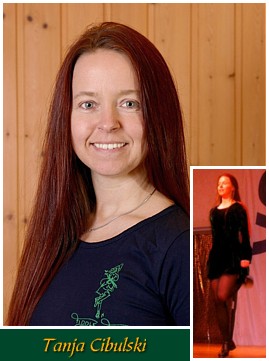