The Band
School of Dancing 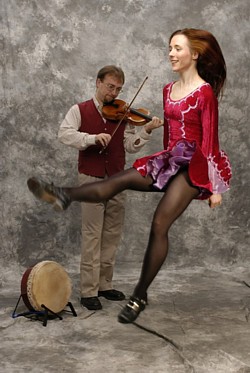 ince forming in 1997, Fiddle & Feet have become one of Germany's most exciting acts. In a rich and varied programme featuring music, song and step dancing they transport audiences on a journey around the North Atlantic rim. From Ireland and the Outer Hebrides to Nova Scotia, New York and the Appalachian Mountains - the rhythms and melodies guarantee a feast of music for both the eyes and ears.

Scottish & Irish Traditional Music, Tap and Step Dancing from around the Globe

'Fiddle & Feet'
feat. Craig Herbertson
The show is based around the versatile fiddling of Edward Westerdale and the unique dancing talents of Natalie Westerdale (formerly Natalie Aboulfath).

Natalie Westerdale has been a highly respected dancer in Germany for many years. Her feet are equally at home with Irish stepdancing, American jazz tap, as well as Cape Breton stepdancing and Appalachian flatfooting. Her musicality and rhythm derive from a deep belief that dancing feet are actually musical instruments - making her a true "musician's dancer". She has produced choreographies for the Internationale Maifestspiele at the Staatstheater Wiesbaden, initiated the "Rhythmania" tap dance shows 1996-1998, and performed as a guest dancer with Old-Time band "Bruce Molsky & Big Hoedown", the classical orchestra "Camerata Instrumentale" and the Irish supergroup "Beoga". She is performaing as a solo dancer with the Celtic crossover band Scotch4. Natalie is also one of 1693 proud record holders of the "Longest Line" of Riverdance, a world record established in Dublin on 21st July 2013. In April 2016, the Theater Nordhausen celebrates the German premiere of the Boublil-Schönberg-musical "The Pirate Queen" about Ireland's national hero Grace O'Malley: Natalie feels honoured to have been invited to choreograph the Irish dancing parts of the show.

Edward Westerdale is a performer with a growing reputation. Equally at home with Scottish, Irish and Old-Time music and songs as well as Gypsy jazz, his playing is by turns dynamic and sensitive, driving and melodic. Dancing feet always find the perfect partner when his bow hits the strings. He co-arranged the music for the international Irish dance show "Celtic Life" in which he also performed. Along with Natalie Westerdale, he is a founder member of Scapa Flow - one of the top Scottish/Irish bands based in Germany. Edward's newest project is the band Scotch4, featuring the songs of Craig Herbertson, seasoned with cask-strength Scottish fiddle tunes, but much more than just that... 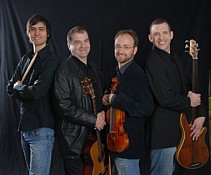 'Scotch4' – Original & Traditional Music
from Scotland's Soul
With Craig Herbertson Fiddle & Feet have not just found a versatile guitarist, but also the perfect voice for Scottish and Irish ballads and songs. Craig performs masterpieces by renowned poets such as Robert Burns and Sir Walter Scott, as well as his own compositions. The single "Hearts of Glory" by Craig Herbertson and Ed Westerdale climbed to the top 20 in the UK Indie charts in 2004.

In 2001, Fiddle & Feet became the first German band to be invited to perform at the Dublin Summerfest, St. Stephen's Green. They were voted "Best International Folk Ensemble" and invited back for a return engagement in 2002 and 2009. Other highlights include performances at the Rudolstadt Folk Festival in 1998, the Celtic & American Folk Music and Dance Festival and Berlin International Tap Dance Festival 2001 among many others. 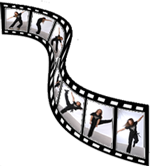 Natalie Westerdale (formerly Aboulfath) is also in great demand as a teacher. Her own school, the Fiddle & Feet School of Dancing, has had a permanent home in Wiesbaden since 2005. In August 2015, the studio has moved to its new premises in Dantestrasse - the tap dance inferno continues! Natalie also gives dozens of workshops throughout Germany and Europe each year. Some of these feature Edward Westerdale who provides live accompaniment on the fiddle. Her course for training Irish dancing instructors is run in partnership with the Irish National Folk Company Dublin and is officially recognized by the general dance teachers association of Germany (ADTV).
Imprint | Disclaimer | Privacy Policy